I had been thinking for a while about building a hovercraft, based on these instructions, and have finally done so.

I started by building a small prototype model from cardboard and a plastic shopping bag, powered by first a balloon and then a small air pump intended for blowing up Lilos etc.. Skewers were required to stop the cardboard bending too much. This model worked quite well. 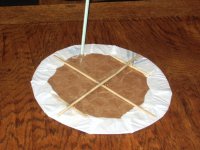 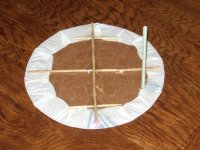 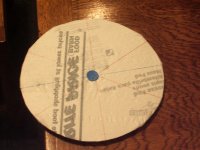 I first went to Second Treasure (the recycling centre at the dump), and bought a vacuum cleaner, as well as several pieces of wood which I didn't end up using. On Sunday 19-6-2005 afternoon, I went to Mitre 10 and bought the plywood (1200x1200x12mm untreated), black polythene sheet (2x2m of the thickest grade available), tacks (which I didn't use in the end) and duct tape. I constructed the first hovercraft on Sunday afternoon and Monday. It works well on tiles and reasonably well even on carpet, but unfortunately I don't have any large smooth area to test it properly. It is necessary to balance carefully or the edges touch the ground, significantly increasing friction (and wearing out the polythene sheet). When unloaded, it tends to start vibrating, which increases friction. Fortunately this isn't a problem when it has a passenger. 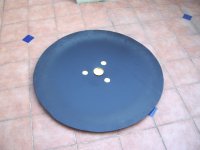 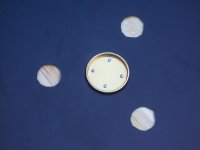 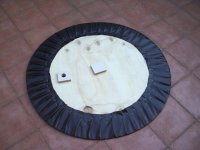 It took a while to put in all the staples, particularly as they often didn't go in properly the first time and I had to redo them several times. A staple gun would have made things much easier (I just used a normal stapler). 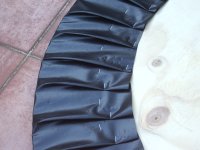 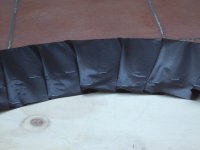 This is where the vacuum-cleaner hose is attached, with much duct tape to seal: 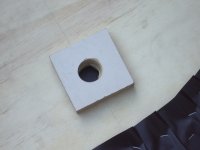 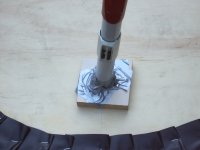 The edge lifts off the ground by a few centimetres: 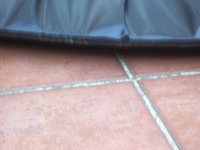 See how the skirt puffs up. The vacuum cleaner is off in the first photo, on in the second. 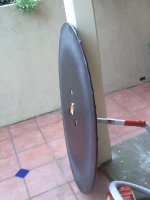 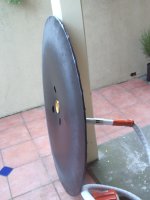 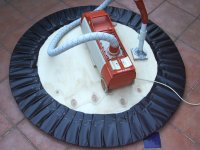 Yes, it carries me quite well. I can stand, kneel or sit; I find kneeling is best as it allows me to to easily shift my weight while still having a fairly low centre of mass. It is necessary to keep the cord out of the way. 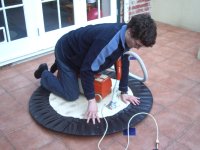 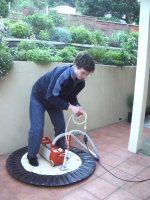 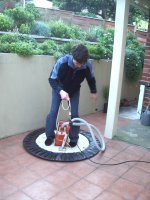 After demonstrating the main hovercraft (described above) to some people and discussing it with them, I decided to try a different, simpler design based on a tyre tube. Unfortunately this design didn't work very well. When unloaded, it vibrates worse than the main design. It is also more difficult to balance properly so that the sides don't rub against the ground. 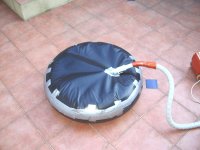 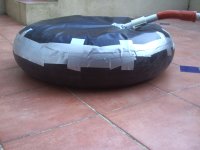 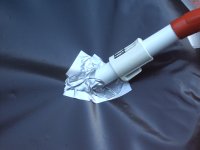 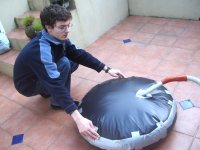 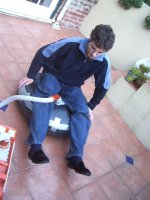